Native vs. Hybrid for mobile app development: What to choose?

When a business needs an app developing, there are a wide number of choices to be made in the discovery stage. That’s when everything is a blank canvas. One of those choices is which technological route to take, which means native vs. hybrid mobile app development.

If you are wondering what native vs. hybrid means, then this article is for you. We will outline what they both mean, and how making this choice at the blank canvas stage can influence the outcome of the project, finished version of the app(s), costs and potential timescales involved.

In order to understand exactly what this means, a global overview of apps and smartphones needs to be done. Over the last 10 years, the smartphone operating landscape has consolidated into two main camps: Apple and Android, the main Google operating system (OS).

Worldwide there are over 1 billion iPhone users, all running one version or another of iOS, Apple’s  mobile operating.  Plus many more who have iPads, Apple Watches, TVs, and Macs. Having a Mac also means you can download apps, providing they’re developed for the MacOS. In the other camp, there are over 3 billion active Android devices around the world, according to the Google I/O 2021 conference.

Although there are other operating systems, such as Microsoft, the vast majority of apps, especially if they’re consumer or B2B-focused, need to be developed with one or both operating systems (Android and iOS) in mind. Depending of course on the audience and target customer-base of the app you want developing.

Now let’s take a look at the two options for developing an app: native vs. hybrid.

What does Native app development mean?

Native app development means to have an app developed aligned with the best coding languages for the operating system you want to launch it on. If, for example, the majority of your customers are Apple users (iPhone, iPad, Mac, etc.), then it would make sense to develop an app for iOS first.

In which case, the most sensible and cost-effective approach would be to ensure an app is developed in Swift or Objective-C, which are the languages that are best suited for iOS. Not only is this the best approach for the operating system in question, but this ensures that the app is developed in such a way to align with the relevant smartphone hardware.

Whereas, if the majority of your target users/customers are using Android devices, then Java is the go-to coding language for app development. Java, or Java-based variants and similar languages make it easier to integrate with Android and relevant hardware features.

For many companies, however, it isn’t always possible to know where potential users/customers are. You can’t always know before an app is developed which operating system they are using. In which case, it often makes sense to ensure an app is created with both, and potentially others such as Microsoft, in mind. And the only way to do that is to take the hybrid app development approach. 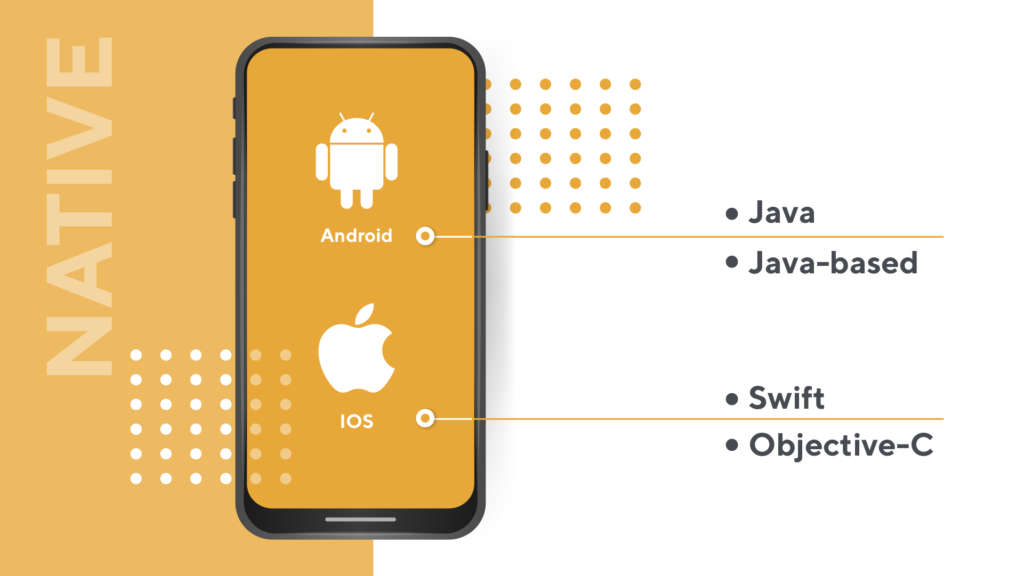 What does Hybrid app development mean?

Getting a hybrid app developed means you are getting one app created, and then pushing it live across two or more platforms. Usually iOS and Android, although this does open the door for other operating systems too, such as MacOS.

For the end-user, they shouldn’t know any different. Apps will be downloaded from the relevant app store, such as the Apple App Store or Google Play. However, from a development perspective, this is effectively a website — also known as a web app — wrapped to appear in-sync with the operating system.

Coding languages for hybrid app include a wider range, such as HTML5, Java, React Native, and numerous others. Plugins and APIs ensure that these apps integrate with hardware and other features, and various templates make this cost-effective for the client wanting an app developed. 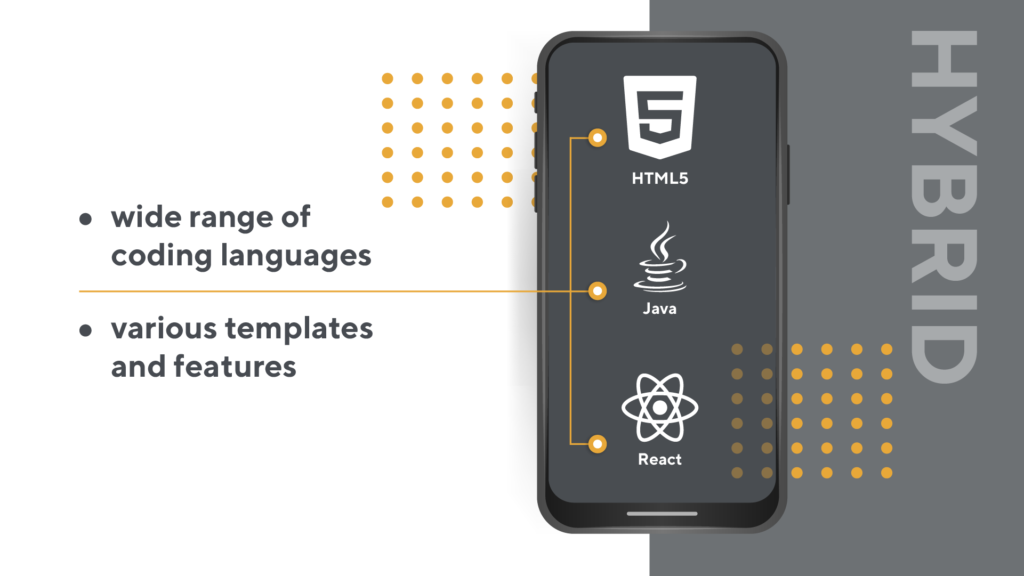 What a company chooses comes down to a range of factors.

Cost is always one of these. Getting a hybrid app developed is usually more cost-effective. It means getting one app developed, with one set of features, one UX/UI, back-end, and using the same APIs and plugins. Whereas, getting two hybrid apps developed usually costs twice as much, because developers with different skills and coding language experience are required to get them created.

On the downside, there might be some quality and user-experience downsides for the end-users, compared to native apps. Which is worth thinking about. So if it’s possible, it could be useful to clearly understand which operating system your users/customers are likely to be on before committing to one system or another, or a hybrid app.

It also depends which features need to be developed for the first version of the app. It’s equally important to factor growth goals into any plan to launch an app. Such as, how many people do you want or need to reach? If the aim is millions or more, then launching on two platforms is the best approach.

Getting a native app developed means it’s aligned exactly with one or more operating system in mind, such as iOS (Apple) or Android. This ensures it fits with native features, including hardware, more smoothly than an app not developed for that particular operating system. 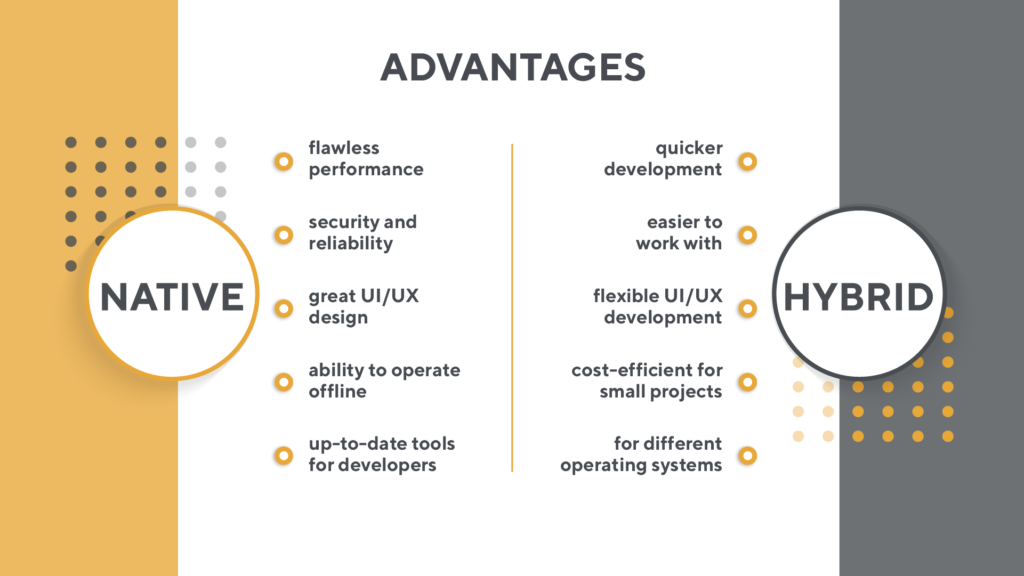 Low-Code development systems and their benefits 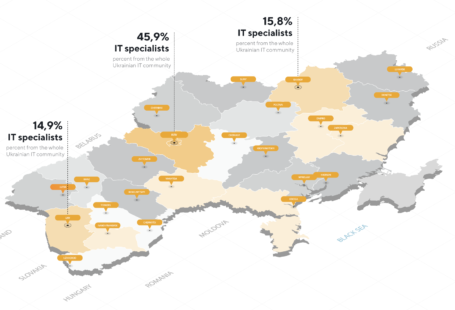 How to hire software developers in Ukraine?